In a sewage (or industrial wastewater) treatment plant, the activated sludge process is a biological process that can be used for one or several of the following purposes: oxidizing carbonaceous biological matter, oxidizing nitrogenous matter: mainly ammonium and nitrogen in biological matter, removing nutrients (nitrogen and phosphorus

The general arrangement of an activated sludge process for removing carbonaceous pollution includes the following items:

Treatment of nitrogenous matter or phosphate involves additional steps where the mixed liquor is left in anoxic condition (meaning that there is no residual dissolved oxygen).

The extended aeration process is an advanced activated sludge process which involves treatment of primary clarified effluent with a culture of microorganisms called "mixed liquor/Biomass". This mixed liquor is retained in the aeration tank and an adequate oxygen source is provided for biological activity and to keep the "mixed liquor" in well mixed condition. The microbes consume the organic waste in the effluent leading to biomass production. The suspended solids and biomass are separated from the treated water in a secondary clarifier. Part of the biomass is returned to the aeration basin as return activated sludge (RAS), to keep the required MLSS level in the aeration tank. The BOD removal efficiency of the extended aeration process is higher than the conventional activated sludge process.

SBR is an activated sludge process designed to operate as a batch process instead of a continuous process. Here aeration and sludge settlement occur in the same tank. The SBR design is a fill-and-draw type activated sludge process where the following steps take place consecutively i.e. anoxic fill, reaction, settling, decanting followed by sludge wastage. The SBR aeration system generally consists of fine bubble air diffusers. In this process, the compressed air is sheared in to small bubbles creating large specific surface area for high mass transfer efficiency between air and wastewater. SBRs produce sludge with moderate settling properties provided the influent wastewater is admitted in to the aeration in a controlled manner. The SBR process is fully automated to control the operation of the various cells.

Filling, aeration and settling is done by PLC based timer operation. The settled effluent is decanted using a decanter mechanism. Sludge is withdrawn and recycled to the tank inlet for maintaining required MLSS and anoxic conditions. Excess sludge is dewatered in a thickener followed by filter press and then disposed. 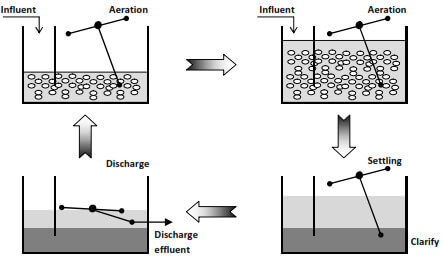 The MBBR process is based on the bio film attachment on fluidized media and utilizes the advantages of activated sludge and other biofilm systems without being restrained by their disadvantages. The basis of this process is the biofilm carrier elements that are made from polyethylene/HDPE/suitable plastics. The plastic elements provide a large surface area for the biofilm attachment and optimal conditions for the bacteria culture to grow and thrive. The bacterial cultures digest the soluble organics, gradually grow and detach from the media.

The MBR technology is a relatively recent development in the field of biological treatment, using a membrane based process to produce clear treated wastewater with low turbidity, suitable for RO feed. Membranes are placed in the aeration tank to separate treated effluent from mixed liquor. Membranes being an absolute physical barrier ensure removal of suspended and colloidal impurities. MBR applications include retrofits of existing systems as well as installation of new systems, for both meeting the most stringent discharge norms and also for reuse. The MBR process operates at higher MLSS concentration with higher sludge retention time thus producing a low quantum of biological sludge and therefore reducing the sludge dewatering cost. In the MBR process, the liquid solids separation takes place using membranes. The product is a clear, low- turbidity effluent and no secondary clarifier is required in this process.

Electrocoagulation (EC), is a technique used for wash water treatment, wastewater treatment, industrial processed water, and medical treatment. Electrocoagulation has become a rapidly growing area of wastewater treatment due to its ability to remove contaminants that are generally more difficult to remove by filtration or chemical treatment systems, such as emulsified oil, total petroleum hydrocarbons, refractory organics, suspended solids, and heavy metals. There are many brands of electrocoagulation devices available and they can range in complexity from a simple anode and cathode to much more complex devices with control over electrode potentials, passivation, anode consumption, cell REDOX potentials as well as the introduction of ultrasonic sound, ultraviolet light and a range of gases and reactants to achieve so-called Advanced Oxidation Processes for refractory or recalcitrant organic substances. A fine wire probe or other delivery mechanism is used to transmit radio waves to tissues near the probe. Molecules within the tissue are caused to vibrate which lead to a rapid increase of the temperature, causing coagulation of the proteins within the tissue, effectively killing the tissue. At higher powered applications, full desiccation of tissue is possible.

Multi Barrier System: The key to ensuring clean, safe and reliable drinking water is to understand the drinking water supply from the source all the way to the consumer's tap. This knowledge includes understanding the general characteristics of the water and the land surrounding the water source, as well as mapping all the real and potential threats to the water quality. These threats can be natural, such as seasonal droughts or flooding, or created by human activity, such as agriculture, industrial practices, or recreational activities in the watershed. Threats can also arise in the treatment plant or distribution system thanks to operational breakdowns or aging infrastructure.

The multi-barrier approach takes all of these threats into account and makes sure there are "barriers" in place to either eliminate them or minimize their impact. It includes selecting the best available source (e.g., lake, river, aquifer) and protecting it from contamination, using effective water treatment, and preventing water quality deterioration in the distribution system.

The approach recognizes that while each individual barrier may be not be able to completely remove or prevent contamination, and therefore protect public health, together the barriers work to provide greater assurance that the water will be safe to drink over the long term.

Multiple-effect distillation (MED) is a distillation process often used for sea water desalination. It consists of multiple stages or "effects". In each stage the feed water is heated by steam in tubes. Some of the water evaporates, and this steam flows into the tubes of the next stage, heating and evaporating more water. Each stage essentially reuses the energy from the previous stage.

The tubes can be submerged in the feed water, but more typically the feed water is sprayed on the top of a bank of horizontal tubes, and then drips from tube to tube until it is collected at the bottom of the stage.

Saltwater is desalinated to produce water suitable for human consumption or irrigation. One by-product of desalination is salt. Desalination is used on many seagoing ships and submarines. Most of the modern interest in desalination is focused on cost-effective provision of fresh water for human use. Along with recycled wastewater, it is one of the few rainfall-independent water sources.

Due to its energy consumption, desalinating sea water is generally more costly than fresh water from rivers or groundwater, water recycling and water conservation. However, these alternatives are not always available and depletion of reserves is a critical problem worldwide. Currently, approximately 1% of the world's population is dependent on desalinated water to meet daily needs, but the UN expects that 14% of the world's population will encounter water scarcity by 2025.

Reverse osmosis (RO) is a water purification technology that uses a semipermeable membrane to remove ions, molecules, and larger particles from drinking water. In reverse osmosis, an applied pressure is used to overcome osmotic pressure, a colligative property, that is driven by chemical potential differences of the solvent, a thermodynamic parameter. Reverse osmosis can remove many types of dissolved and suspended species from water, including bacteria, and is used in both industrial processes and the production of potable water. The result is that the solute is retained on the pressurized side of the membrane and the pure solvent is allowed to pass to the other side.

Ion exchange is an exchange of ions between two electrolytes or between an electrolyte solution and a complex. In most cases the term is used to denote the processes of purification, separation, and decontamination of aqueous and other ion-containing solutions with solidpolymeric or mineralic 'ion exchangers'.

Nano filtration is a relatively recent membrane filtration process used most often with low total dissolved solids water such as surface water and fresh groundwater, with the purpose of softening (polyvalent cation removal) and removal of disinfection by-product precursors such as natural organic matter and synthetic organic matter.

UF's main attraction is its ability to purify, separate, and concentrate target macromolecules in continuous systems. UF does this by pressurizing the solution flow. The solvent and other dissolved components that pass through the membrane are known as permeate. The components that do not pass through are known as retentate. Depending on the Molecular Weight Cut Off (MWCO) of the membrane used, macromolecules may be purified, separated, or concentrated in either fraction.

The presence of elevated levels of arsenic in groundwater has become a major concern around the world, especially in South Asia. Up to date, there is no effective treatment for curing health impacts due to the intake of high levels of arsenic. A wide range of technologies has been developed for the removal of high concentrations of arsenic from drinking water. The most common arsenic removal technologies use oxidation, coagulation, precipitation adsorption, ion exchange and membrane techniques.

Thermal Vapor compression desalination refers to a distillation process where the evaporation of sea or saline water is obtained by the application of heat delivered by compressed vapor. Since compression of the vapor increases both the pressure and temperature of the vapor, it is possible to use the latent heat rejected during condensation to generate additional vapor. The effect of compressing water vapor can be done by two methods. The first method utilizes an ejector system motivated by steam at manometric pressure from an external source in order to recycle vapor from the desalination process. The form is designated Ejecto or Thermo Compression.

Using the second method, water vapor is compressed by means of a mechanical device, electrically driven in most cases. This form is designated mechanical vapor compression (MVC). The MVC process comprises two different versions: Vapor Compression (VC) and Vacuum Vapor Compression (VVC). VC designates those systems in which the evaporation effect takes place at manometric pressure, and VVC the systems in which evaporation takes place at sub-atmospheric pressures (under vacuum).

The compression is mechanically powered by something such as a compression turbine. As vapor is generated, it is passed over to a heat exchanging condenser which returns the vapor to water. The resulting fresh water is moved to storage while the heat removed during condensation is transmitted to the remaining feedstock.

Up Flow Anaerobic Sludge Process: The upflow anaerobic sludge blanket reactor (UASB) is a single tank process in an anaerobic centralised or decentralised industrial wastewater or blackwater treatment system achieving high removal of organic pollutants. Wastewater enters the reactor from the bottom, and flows upward. A suspended sludge blanket filters and treats the wastewater as the wastewater flows through it. Bacteria living in the sludge break down organic matter by anaerobic digestion, transforming it into biogas. Solids are also retained by a filtration effect of the blanket. The upflow regime and the motion of the gas bubbles allow mixing without mechanical assistance. Baffles at the top of the reactor allow gases to escape and prevent an outflow of the sludge blanket. As all aerobic treatments, UASB require a post-treatment to remove pathogens, but due to a low removal of nutrients, the effluent water as well as the stabilised sludge can be used in agriculture. 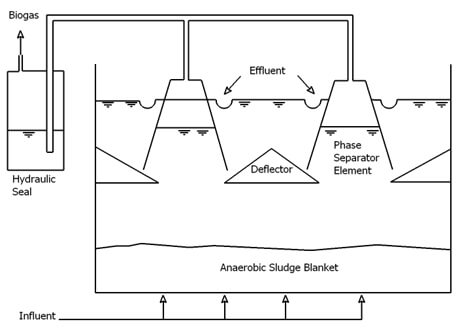